When I came across this small park in a quiet residential area in Menlo Park, I was amazed by its smart design and selection of plants.  All the plants are not only beautiful, but also native, drought tolerant that qualify for Santa Clara’s District’s Landscape Rebate Program.  This  is a nice garden and park in one,  a place where people can relax and enjoy a quite moment.  It is also a place that we might learn one thing or two when we are thinking about designing our own garden. The park is designed by Mara Young (landscape architect), and constructed by Janet Bell & Associates. 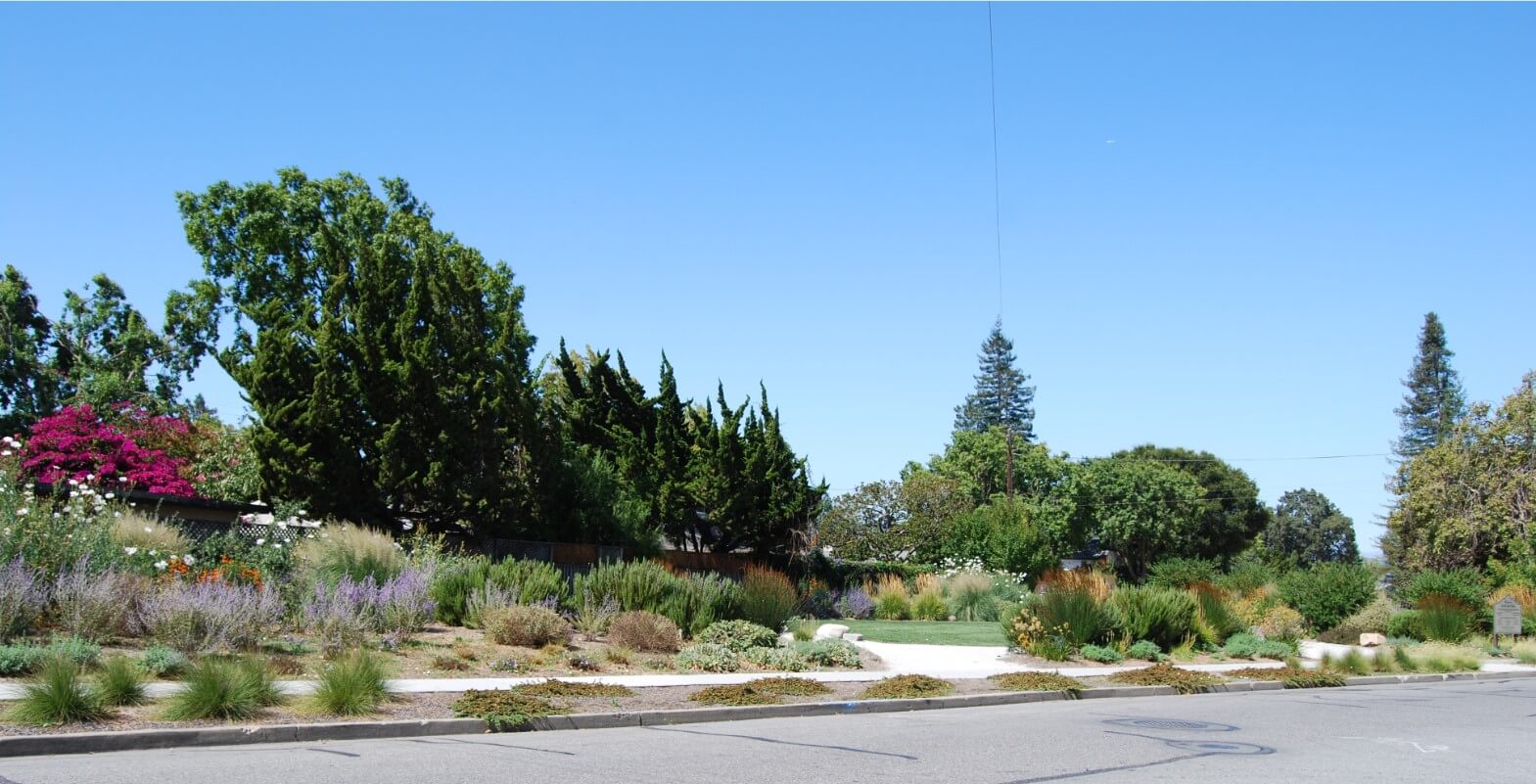 The park can be thought as comprising of two parts: the main area that is centered around an artificial turf, and the side area. For the main area, it can further be divided into front, left, center, back and right areas. 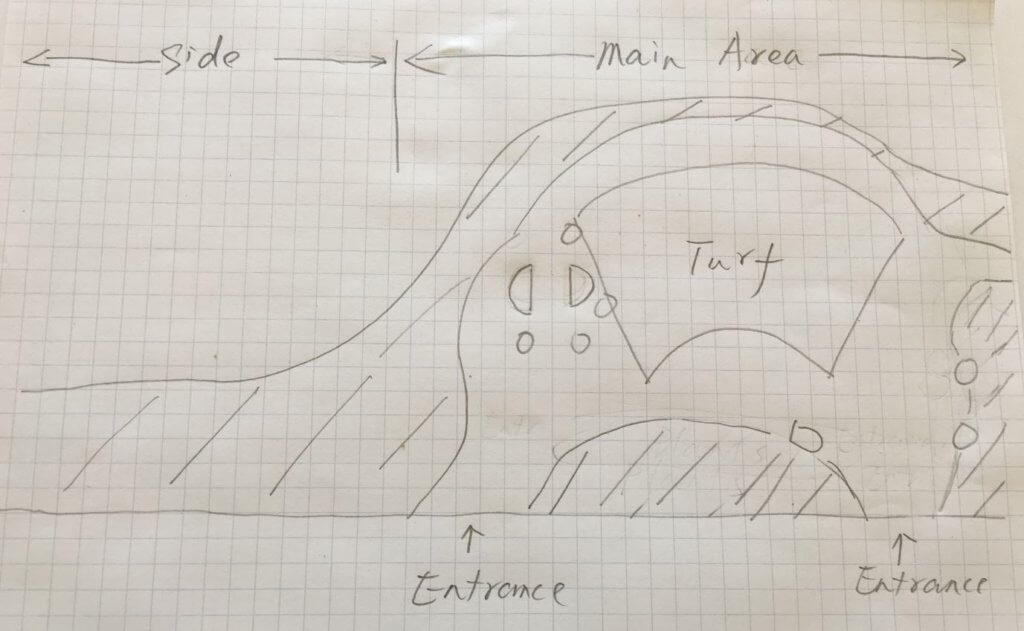 The Front of the Main Area The main area has two rather wide entrances, one on each side.  The plants between the two entrances serve as a nice low wall for the space.

At the right end of the wall is a nice display of plants, accentuated with a rock. 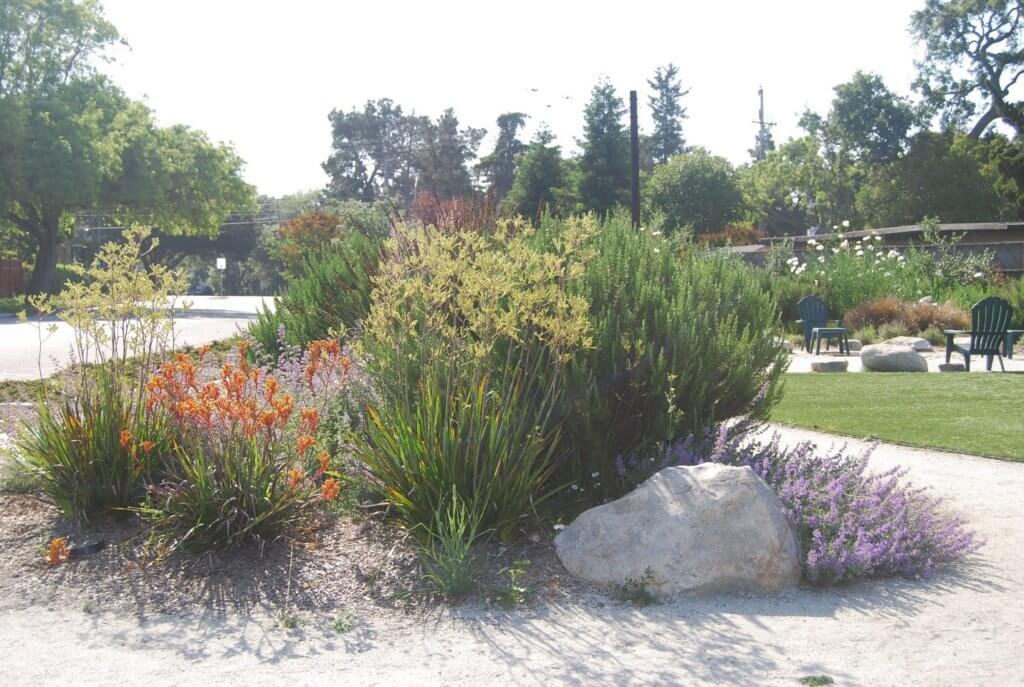 On the left are three Kangaroo’s Paws, with an orange blossom one in the middle and two green ones on each side.  Behind them are some catmints in purple blossom, and rosemary in a tall green bush.  Together they form this background that the blossom of Kangaroo’s Paws contrast nicely against.  The combo of all the colors  make for a pretty and warm welcome.  In addition, since Kangaroo’s Paw and all other plants are native, drought tolerant ones, by having them as the welcome plants, they make it clear this is a water efficient garden with natural beauty.

On the other end of the wall, it is the same combination – Kangaroo’s Paw against rosemary.  The consistency is a nice touch. 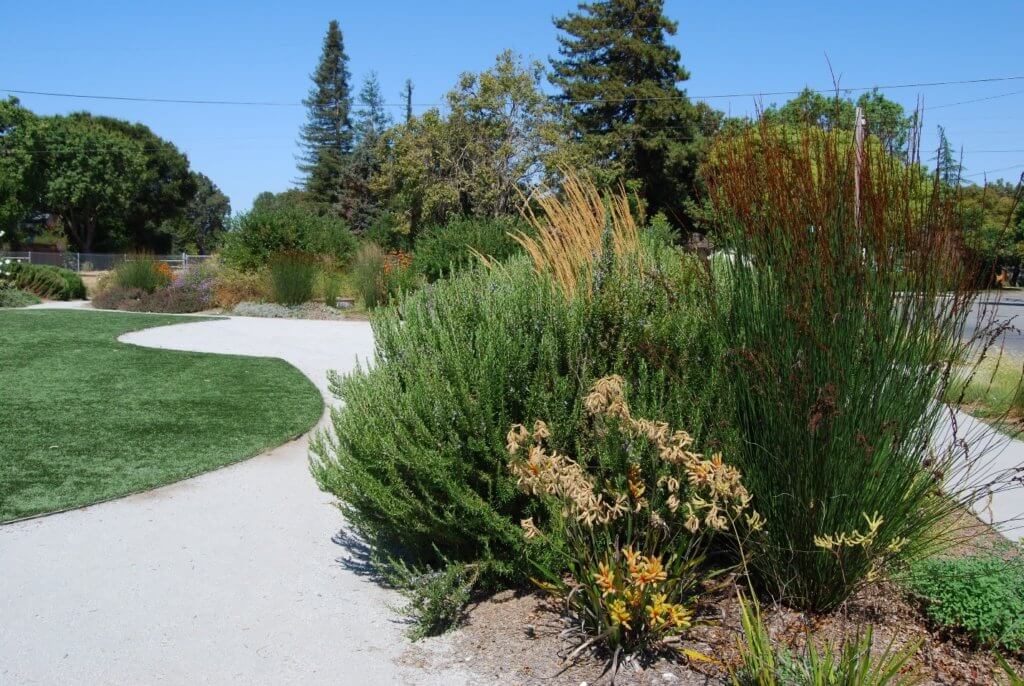 This is the outside view of the wall.   The main body is comprised of rosemary and catmint.  High and low, green and purple: simple yet elegant. 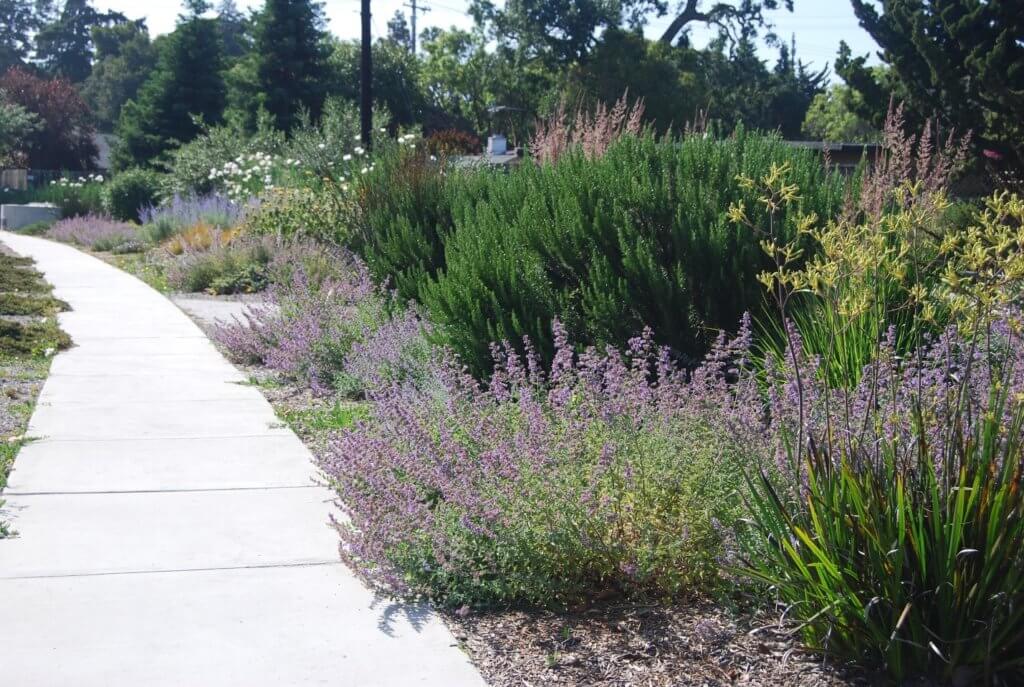 From the inside of the wall, some Lamb’s Ears grow in the middle spot.  The thick leaves add texture; the purple flowers, when it blossoms, are consistent with the color of those for catmint. 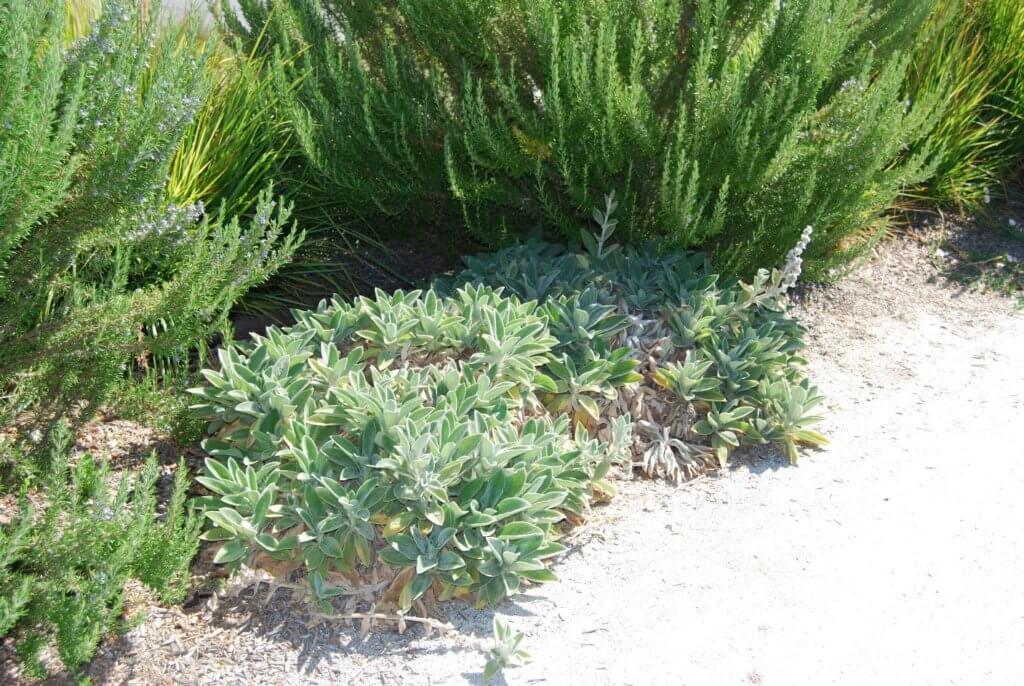 Overall, the front of the main area is made up mainly of rosemary and catmint, with Kangaroo’s Paw and Lamb’s Ear as decoration plants.  The major color theme is green, purple and some orange. The Center and Left of the Main Area The center area is an open space around an artificial turf.  In this space,  people can take a walk, talk to other people, or walk their dogs. 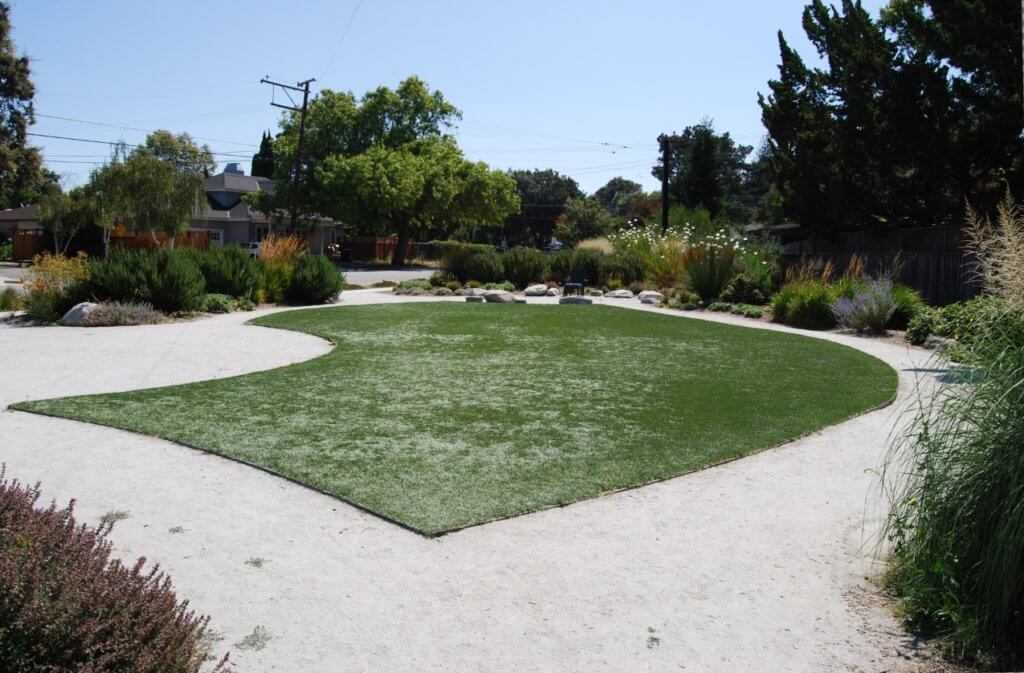 On the left, there is a small sitting area.  The rocks add a casual feel and mental boundary, while also serving as seats when needed. 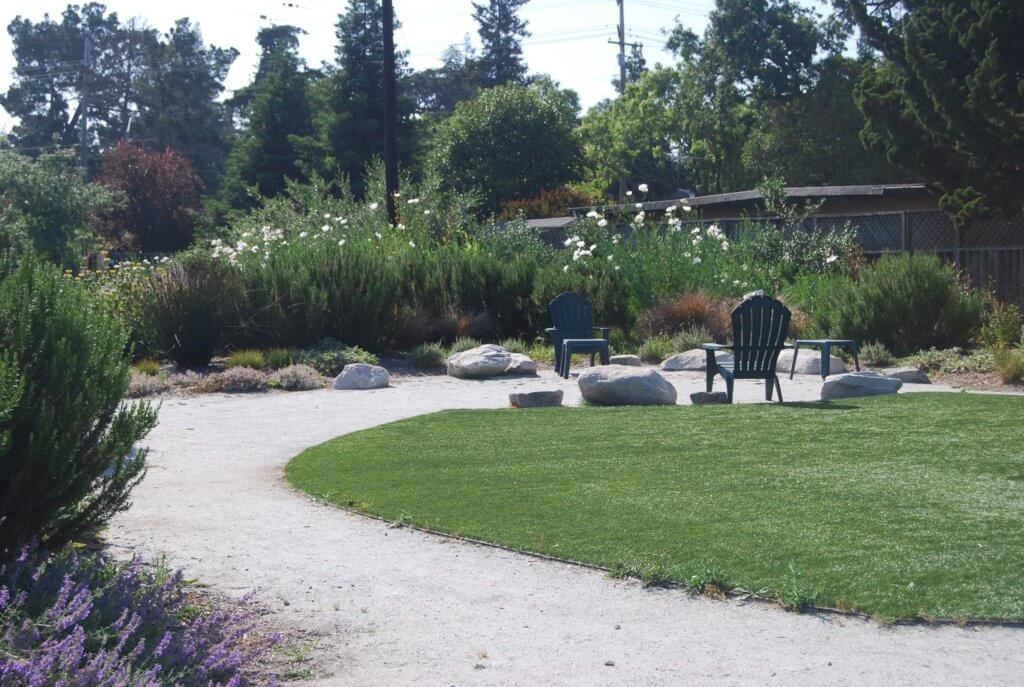 Behind the sitting area, the tall bushes of rosemary, Matilija Poppy, Lindheimer Muhly form a wall that blocks out views from the street and neighboring houses and gives the space privacy.   Lamb’s Ear and catmints on the ground add variety.  Here the major color theme is white, light beige and some purple, against the green background. 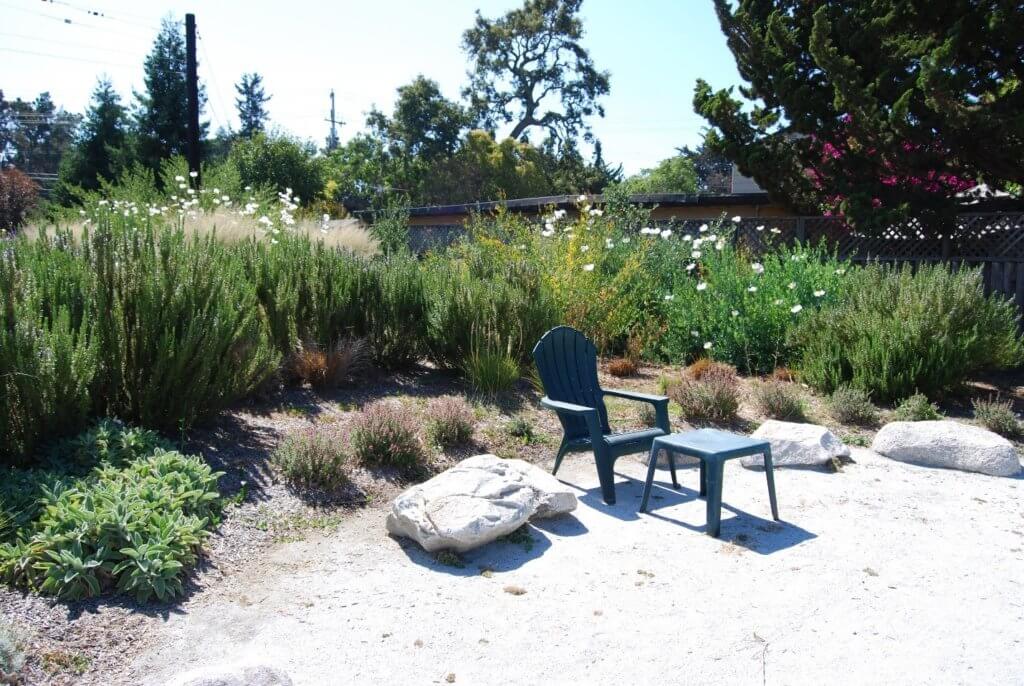 The Back and Right of the Main Area This area is a long thin area which is filled out by a couple of big bushes: Large Cape Rush, Lindheimer Muhly, Russian Sage, and Jerusalem Sage.  Each bush sports a different color that makes the space  pretty and fun:  (from left to right) the brown of the Large Cape Rush, the light brown of Lindheimer Muhly , the purple of Russian Sage, Jerusalem Sage (off bloom season), and the orange of the Lion’s Tail. 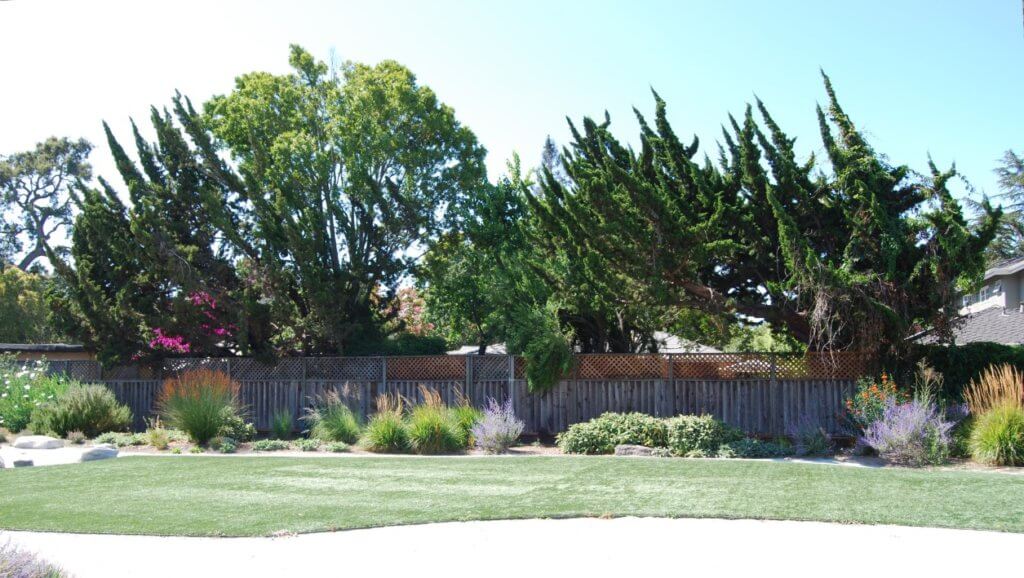 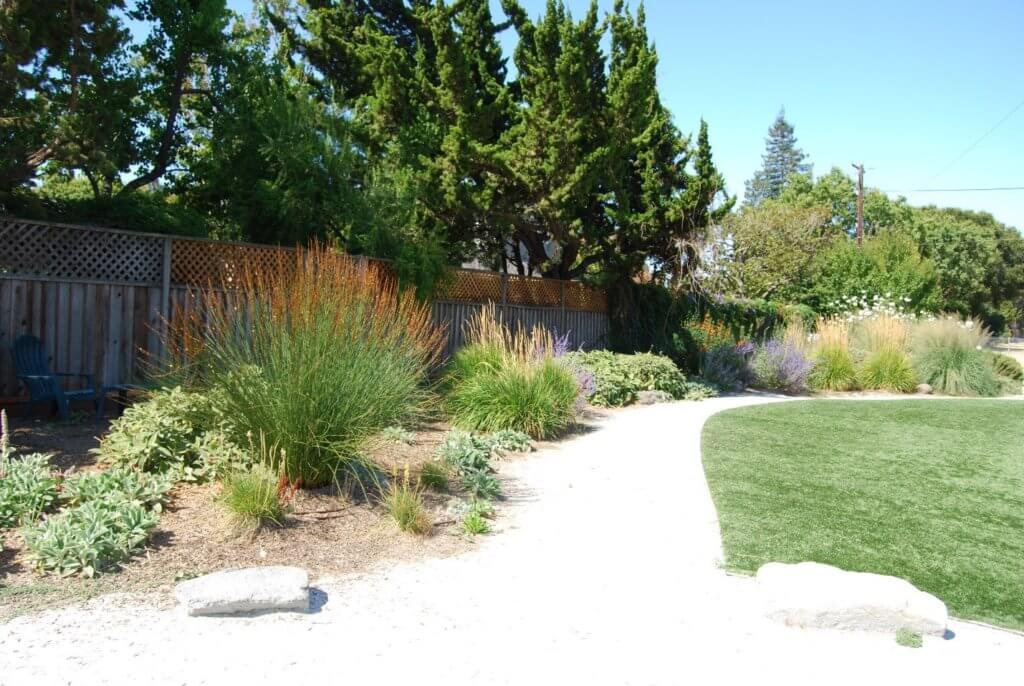 The Jerusalem Sage is off season now and trimmed down;  couple months ago, when it was in full blossom, it boasted of very pretty and unique yellow flowers, filling  up the space with a lovely view.  Not only is it pretty, the sage is also very drought tolerant and needs very little water. 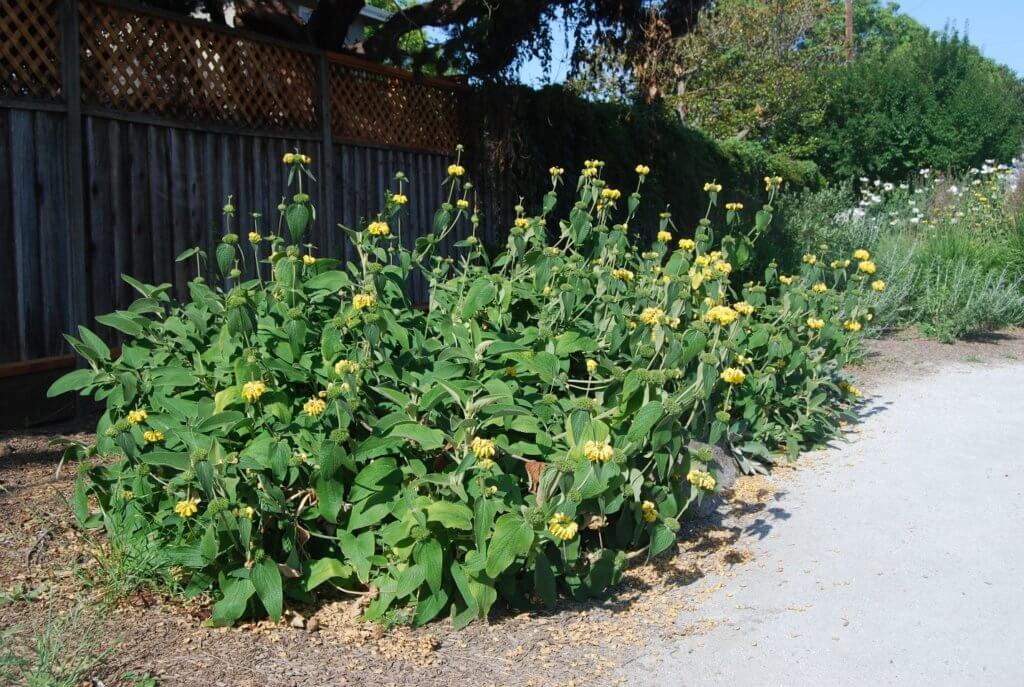 At that time, the Kangaroo’s Paw and Russion Sage next to it, did not blossom yet;  now they do, what a splendid view!   With these three plants together, there is good blossom to enjoy here at this corner throughout most of the year. The tall bushes of Lion’s Tail, Russian Sage, Mitilija Popply, Lindheimer Muhly and Feather Grass form a colorful block, rounding out the back of of main area.  The bright organe color of Lion’s Tail rhymes with that of the Kangaroo’s Paw in the front. The major colors for the back area are brown, purple, yellow, and orange. 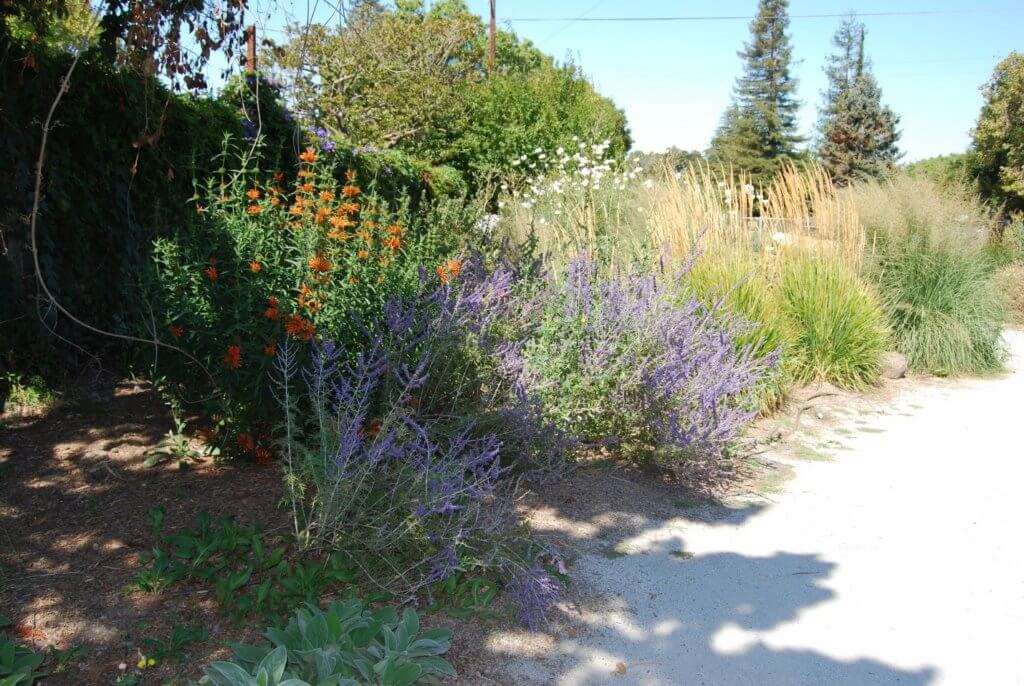 The right of the main area is a strip of plants along the right border of the park, decorated with two rocks.  Green bushes provide the backbone of the block, with a splash of color from a Lion’s Tail (orange), Large Cape Rush (brown), lantana (purple) and verbena(purple).  The big white flowers of Mitilija Poppy far back also add to the colors.  Here the color theme are consistent with the other areas: brown, orange, and purple. 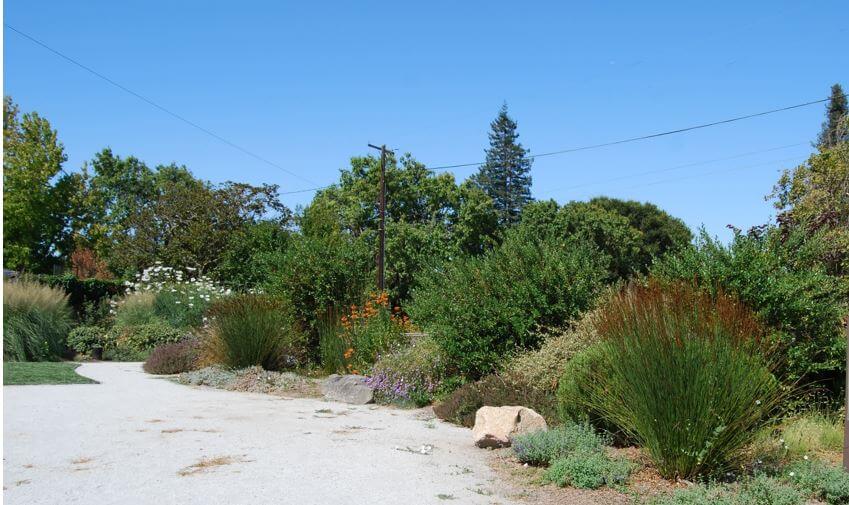 The Side Area This is a long piece of space on the left of the main area.  No park like space here, just a garden.  It is filled with the same native, drought tolerant plants as in the main area: Mitilija Poppy, Feather Grass, Russian Sage and Lion’s Tail.  The pretty blossom of each plant turn a pice of bare land into a beautiful view. 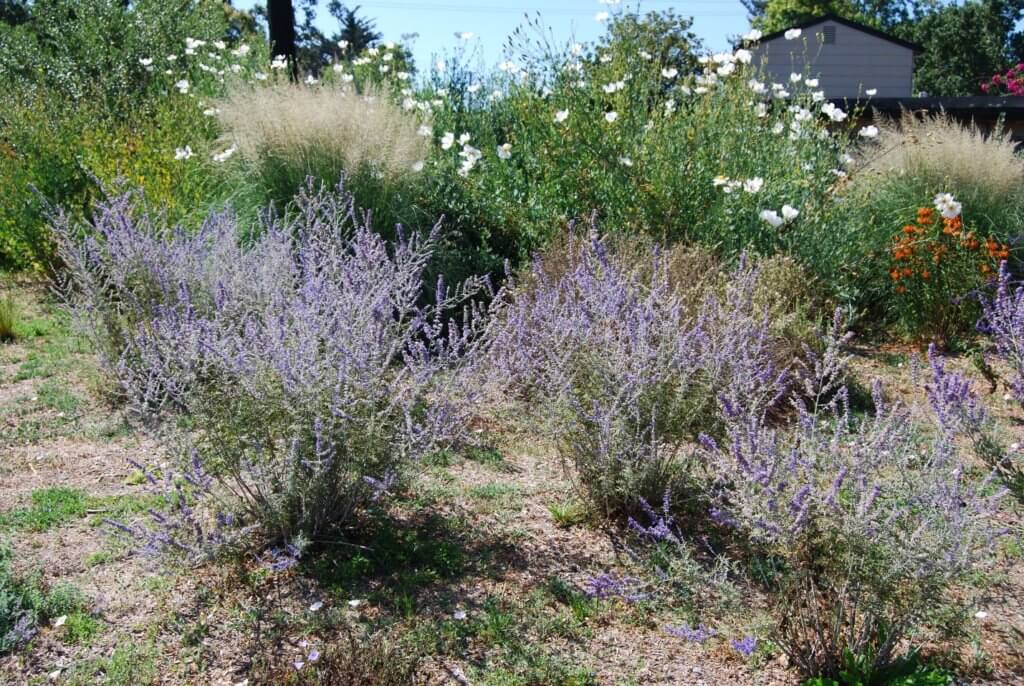 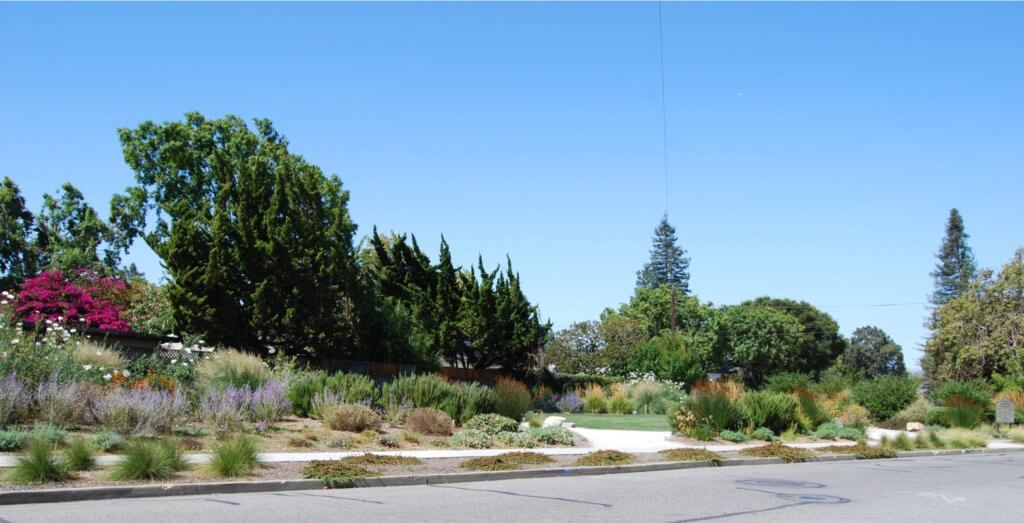 Summary This is a lovely park and garden in one, a perfect place for the community to take a break and relax. When I was walking around the park, these things stood out in my mind in terms of design: The plants: all of them are native, drought tolerant plants, conserving water while providing a beautiful space. The colors:  the main colors of orange, puple, brown, light beige and white  run across all the different areas of the park with some variations, giving it a consistent yet lively feel. The shape: No a straight line or corner in the park (except the 2 side borders of the turf);  all lines are framed naturally by the plants, which goes in harmony with the native plants and the “natural” vibe of the park. Here are the major plants in the garden and their names: