How much water have Californians conserved?

Last April, facing California’s historical 4 year drought, Governor Jerry Brown issued an executive order making it mandatory that statewide urban water use be reduced by 25% compared with 2013 levels starting June 2015.  In May 2015, the State Water Board adopted an emergency regulation requiring an immediate 25 percent reduction in overall potable urban water use.  Now one year has passed, how well have Californians been doing?

Overall, we, the Californians have done quite a good job!  In the month of April 2015, before the emergency regulation, water reduction was a less-than-impressive 13.7%; after, it more than doubled to 29%, easily beating the 25% target.  In the next 4 months in a row, from June to September, the savings all exceeded the 25% target with a high of 31.4% in July. As the cooler and wetter months of fall and winter rolled along, the water saving levels declined to below 25% target, they also started a month-to-month decline, from 22.4% in October 2015 down to 12% in February 2016. The State Water Board renewed emergency water conservation regulations in Feb 2016, making it effective through October 2016.  Following the renewal, people in the state stepped up the effort again, reaching an impressive 24.3% of water reduction in March. Overall Result Statewide the total savings from Jun 2015 to Mar 2016 achieved 23.9% compared with the same months in 2013, which equates to 1,295,703 acre-feet (422.2 billion gallons).  How much is this amount of water?  It is enough to supply the whole population of California for 2 months! 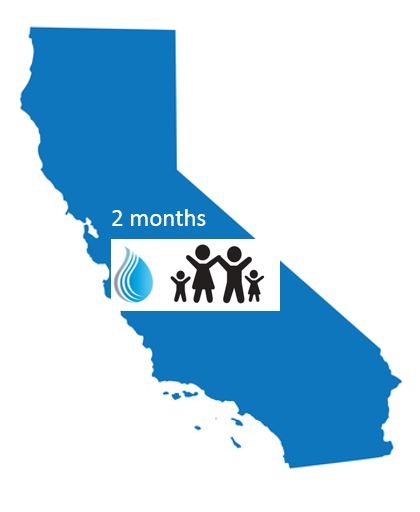 Watering for Outdoor Landscaping How can this much of the water saving be achieved?  A huge part of the answer lies in the savings from lawns and outdoor landscaping. Watering for lawns and outdoor landscaping can account for over 50% of daily water use in many areas; to achieve a 25% reduction it is imperative that watering for lawns be cut back significantly.  In addition to traditional measures such as reducing the length and frequency of watering, the most effective way is to convert a lawn to a water efficient garden. The Department of Water Resources targets to replace 50 million square feet of lawns and ornamental turf with drought tolerant landscapes.  To that end, it has been providing funding for lawn replacement programs; some water companies and local agencies also provide their own rebate programs. See some of the rebate programs here. A water efficient garden doesn’t need to be bare and plaid, with just cactus plants.  Instead, it can be full of beautiful blooms, colors, and all kinds of different plants.  Here you can see some of the garden designs. To calculate how much water you can save by converting a lawn to a water efficient garden, check out the calculator. Overall, while collectively we have all done a pretty good job conserving water, we can continue with our efforts and do even better.  To build a water efficient garden is one of the best ways to go.